Orthotics are used to control the abnormal stress, strain and motion of feet that don’t work right. They are considered medical devices that look like arch supports, but have nothing in common with arch supports, except they both go inside your shoes. When the foot is not working right, over a period of years the end results are painful conditions such as Heel Spurs and Heel Problems, Bunions, Bursitis on the balls of the feet, Corns, Calluses and Plantar Fasciitis. The reason they don’t work right, the majority of the time, is due to an excess amount of a normal motion. This normal motion is called Pronation. But the reason for the Pronation is often due to Morton’s Toe
. 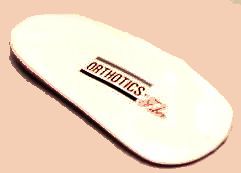 The orthotic does its job by limiting and controlling the abnormal amount (excessive) of pronation that is straining and stressing the feet. It does this by stabilizing all of the bones, tendons, joint, ligaments and muscles of the feet so they don’t move around more than needed. Orthotics are made from everything from steel to leather with the most popular currently being plastic materials.

The way that an orthotic is made is to make a slipper cast from applying plaster to the patient’s foot. While the plaster is on the foot, it is put into what know as the “ideal neutral position” of the foot. This is what captures or locks in the best position for the orthotic to work at. It is then sent to a laboratory where it is made not only based on the cast, but also on the podiatrist’s prescription. The vast majority of the time I also build into my orthotics a “Toe Pad” to treat the problems caused by Morton’s Toe