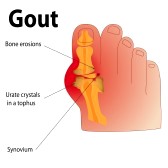 In his previous You Tube Video and article about gout, Dr. Burton S. Schuler stated that gout is a form of painful arthritis caused by high uric acid levels in the blood, which affects joints, especially the big toe joint of the feet.  Schuler also says  that the pain in the joint occurs  when it becomes  inflamed with “gouty crystals”  that settle into  joint spaces. (See Merck Manual.) .  Since high uric acid levels cause this painful condition, the treatment goal is to block or lower uric acid levels through nutritional or medication.  The aim of this article is to discuss the types of medication used for treating gout.  Dr. Schuler’s next article will be about nutritional treatments for gout.

Colchicines has already been written about in a separate article by Dr Schuler.  So the other drugs for gout will be discussed here.

Allopurinol (Zyloprim): This drug is used millions of times aday  for the long term treatment of gout. According to the National Institute of Health, Allopurinol is in a class of medications called xanthine oxidase inhibitors, which help reduce the production of uric acid in the body It works by inhibiting the synthesis of uric acid and it is linked to vascular inflammation, and liver toxicity. These side effects require periodic liver enzyme and renal function tests and complete blood counts for patients on Allopurinol. . Allopurinol is also said to cause gastrointestinal intolerance, such as nausea and diarrhea, and rash develops in about 2% of its users.  Also, Allopurinol hypersensitivity syndrome which is a serve allergic reaction remains a major concern among physicians because it can be life threatening.  Allopurinol is also sometimes used to treat seizures, pain caused by pancreas disease, and certain infections. It is also sometimes used to improve survival after bypass surgery, to reduce ulcer relapses, and to prevent rejection of kidney transplants. Odd Facts: It can take many weeks/months before you feel better from taking this drug.  .  During that time your physician may start you on colchicine to prevent you from having a gouty attacks.

Uloric: According to the drug’s website, this relatively new and more effective drug is the first FDA approved for gout in forty years.  The drug’s goal is to stop the body’s transformation of purines into uric acid.  When compared with Allopurinol in clinical studies, patients taking 40mg of Uloric reached healthy uric acid levels as those on Allopurinol, and “Up to twice as many patients on Uloric 80 mg reached a healthy uric acid level as those on Allopurinol”   They also claim that when   again compared to Allopurinol, more patients’ with mild to moderate kidney problems reached healthier uric acid levels with Uloric. Also, Uloric can be said to be more convenient than Allopurinol since it is taken only once a day, almost anytime, while Allopurinol’s equivalent effective dosage requires taking a pill four times a day, with recommended dosages imbibed after meals for optimal effectiveness.

Febuxostat: Is another new drug   in clinical trials that has shown a similar profile to Allopurinol. Liver function abnormalities, nausea, arthralgia and rash were the most commonly reported problems” (http://clinicaltrials.gov/ct2/show/NCT01508702).

Other Drugs: Research to develop medicines that treat gout symptoms is ongoing, and scientists are also studying which medicines most safely lower uric acid levels.  For example, a drug called Cozaar (Losartan) is used to treat high blood pressure, and it also lowers uric acid levels.  Fenofibrate is used to control certain fats in the blood, and it may increase the kidney’s ability to eliminate uric acid (http://www.medicinenet.com/fenofibrate-oral/article.htm).  A new medicine, a Urate oxidase; that  may change uric acid into an absorbable molecule is now under investigation  There is also  a new class of  drugs, called  Y-700 medicines  that decreases the amount of uric acid the body makes, that  are also being evaluated.

Dr. Burton S. Schuler is a foot doctor, foot care specialist (Podiatrist), of Panama City, Fl and the director of the Ambulatory Foot Clinics Podiatric Pain Management Center.He treats patients with gout on a regular basis.  He is also the author of the new book Why You Really Hurt: It All Starts In The Foot