Many Patients’ with Fibromyalgia not believed, says Podiatrist 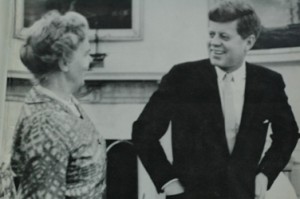 Dr. Travell with President Kennedy in the White House

According to a recent survey of physicians who treat fibromyalgia patients, these patients face an uphill battle having their condition taken seriously (http://www.fmaware.org/site/PageServer?pagename=fibromyalgia). This is because Fibromyalgia, which has also been referred to as fibromyalgia syndrome, fibromyositis and fibrositis, is characterized by chronic widespread pain, multiple tender points, abnormal pain processing, sleep disturbances, fatigue and often psychological distress. For those with severe symptoms, fibromyalgia can be extremely debilitating and interfere with basic daily activities.

The study surveys 189 general practitioners (GPs) and 139 specialists, summarizing doctors stated reasons for their negative views toward fibromyalgia: “Twenty-three percent of general practitioners and 12 percent of specialists characterized fibromyalgia patients as malingerers” (http://www.fmnetnews.com/basics-news-perceptions1210.php). These statistics validate what many fibromyalgia patients already knew; they experience biased attitudes in the doctor’s office and it is difficult to get proper diagnosis and treatment when these attitudes are so widespread.

Thankfully, there are physicians out there who are willing to take seriously fibromyagia complaints (http://whyyoureallyhurt.com/mortons-toe/fibromyalgia/). One such doctor is Panama City, Florida podiatrist and author, Dr. Burton S. Schuler, who has written on how a short metatarsal bone (Morton’s Toe) Long Second Toe can affect pain throughout the body–including fibromyalgia pain.

Dr. Schuler draws from medical research by Dr. Janet Travell, a White House physician to both Presidents Kennedy and Johnson, who studied “myofascial pain,” (muscle pain anywhere in the body). This is quite similar to fibromyalgia. Both doctors Travell and Schuler acknowledge a connection between these myofascial/ fibromyalgia pain and Morton’s Toe–or short first metatarsal bone (http://whyyoureallyhurt.com/resources/dr-janet-travell/).
The first toe bone’s length has a great impact on physical pain because if the foot pronates improperly, you can have pain throughout your body. Dr. Schuler writes that many of his podiatry patients who are diagnosed with “Fibro” and have Morton’s Toe respond positively to his toe pad treatment: a simple pad taped beneath the big toe of each foot.

In the 1920’s and 1930”s Dr. Dudley J. Morton of Yale Medical School and Columbia Medical School wrote that a problem with the 1st metatarsal bone, known as a Morton’s Toe could be the reason for most foot problems. Dr. Janet Travel, White House physician to Presidents Kennedy and Johnson, and Professor Emeritus of Medicine at George Washington University took this concept further by writing and teaching that the Morton’s Toe could cause pain all over your body including being a cause of fibro. She wrote and taught for four decades that a “Morton’s Toe could cause, back, hip, knee, leg foot and ankles problems. She felt that the Morton’s Toe, was so important that at the age of 89 she made a video tape to teach other physicians about how to recognize it and how to treat it.

Why You Really Hurt: It All Starts in the Foot, tells the story of these two famous physicians and their association with the common, but painful, medical condition known as the Morton’s Toe. Millions of people suffer everyday with chronic aches and pains from head to toe and don’t know why. Many of them have lost all hope, and believe they will have to live with these pains for the rest of their lives when it just might be the Morton’s Toe, causing their pains The good news is that all of these problems can be treated with a simple pad that costs about two to three dollars