JFK, Your Feet , & Trigger Points explained by a podiatrist 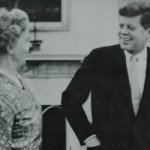 One of the most important physicians of the twentieth century was a woman named Janet Travell, whose work on pain is very relevant for medical diagnosis and treatment today. Two recent books discuss Travell’s work. The first is The Trigger Point Therapy Workbook: Your Self-Treatment Guide for Pain Relief–by Claire Davies, NCTMB with Amber Davies, NCTMB) (http://www.triggerpointbook.com/). Another book, Why You Really Hurt: It All Starts in the Foot, Dr. Burton S. Schuler highlight Dr. Travell’s important contributions to the study of muscle pain, also known as Myofascial Pain Syndrome (http://whyyoureallyhurt.com/resources/dr-janet-travell/).

Pain research ran in Travell’s family. In 1901, Dr. Janet Travell was born in New York City in a family of physicians. (Her father was recognized as an early pioneer in the treatment of pain.) She attended Wellesley College, and then graduated from Cornell University Medical School in 1926, and graduated top of her class. She became a leading expert in treating muscle pain (Myofascial Pain Syndrome) and general pain management (http://whyyoureallyhurt.com/resources/dr-janet-travell/).

Because he was suffering from severe pain, President John F. Kennedy, Jr. was fortunate to cross Dr. Travell’s path. He also asked her to become his private physician in the White House. She first met Kennedy in 1955, at her office in New York City while he was on crutches. He could not bend his right knee or put any weight on the left foot or side of his leg. After being treated by Travell, he was sworn in as US President 5 years later in 1961. His brother, Robert, credits Travell as the reason Kennedy was able to manage his pain and ascend to the presidency.

What pain management techniques specifically did Travell utilize that would help her treat people such as Kennedy so successfully, earning her the distinguished position of White House physician for both Kennedy and Johnson? The theory of Myofasical Pain Syndrome includes trigger points, which are described in both authors websites and books (http://www.triggerpointbook.com/travell.htm).

Travell co-authored with David Simons a book Myofascial Pain and Dysfunction: The Trigger Point Manual. In this book, they explained how “myofascial trigger points are tiny contraction knots that develop in a muscle when it is injured or overworked. The part of a muscle fiber that actually does the contracting is a microscopic unit called a sarcomere, and millions of sarcomeres have to contract in your muscles to make even the smallest movement. A trigger point exists when over stimulated sarcomeres are chemically prevented from releasing from their interlocked state (http://www.triggerpointbook.com/triggerp.htm).

It’s the innovative research on trigger points that distinguishes Travell’s pain research, and it is for this reason she is acknowledged by the Davies’ and Dr. Burton S. Schuler in their respective books.

WHAT IS WHY YOU REALLY HURT:  IT ALL STARTS IN THE FOOT

Why You Really Hurt: It All Starts in the Foot, tells the story of two famous physicians and their association with the common, but painful, medical condition known as the Morton’s Toe.  Millions of   people suffer everyday with chronic aches and pains from head to toe and don’t know why.  Many of them have lost all hope, and believe they will have to live with these pains for the rest of their lives. The book is significant because for the first time  in seventy years  the public is  made aware of the importance of the  Morton’s Toe, and the fact  that could be the real  unidentified reason  (the “medical missing link”)  for their  unending  torments. This book will also show how Morton’s Toe can also cause fibromyalgia, arthritis, sleep disturbances (RLS), temporomandibular joint pain, and numerous other problems through out the body The good news is that all of these problems can be treated with a simple pad that costs about two to three dollars. The bad news is  that in spite of the fact that two of the most famous doctors of the twentieth century were behind the Morton’s Toe, most modern day physicians are not aware of Morton’s Toe or of it ability of causing pain all over the body. This book took six years to research and write, but Dr. Schuler feels it was worth it because it should be able to help many people get out of pain. The book is disturbed national by the Cardinal Publishing Group. It will be translated to Greek this Year.