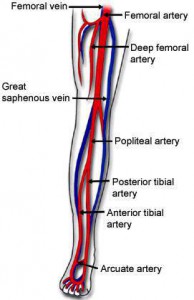 Arteries of the lower leg effected by PAD in diabetes

As a foot care specialist, podiatrist I treat diabetic foot complications on a daily basis.    I am always looking for the newest treatments to help these problems.  There is a new  therapy for diabetic peripheral artery disease, that  I found interesting.

It has been known for some time that due to changes in people’s diet’s  worldwide  that  the amount of diabetes has increased,  and so has the amount of  lower leg disabilities caused by peripheral arterial disease  (PAD)  caused by these changes in  said  diet  (ie you can get a Big  Mac in India)

Treatment for Poor Circulation due to Type II Diabetsis

As a podiatrist over 38 years of treating PAD caused by Diabetsis  I feel  walking is by far the simples’ and most effected therapy for improving your vascular stasis.  The more you can walk the better it will get, and mild increase will help; and walking is more important than a controlled sugar level in treating poor circulation. Of course it is also vital in the lowering of abnormal high lipids in your blood in order to control peripheral arterial disease, especially the LDL.

By Pass Surgery: Since the blood vessels involved in PAD in Diabetsis have small openings and have many tiny branches conventional bypass surgery is not effected in reducing the blockage seen in these  problems and do not have a  long-term satisfactory outcome.

Therefore, new types of blood vessel surgeries were needed to   improve the treatment of vascular disease of the legs due to Diabetsis. Two of them are  percutaneous transluminal angioplasty and  luminal stenting surgery.  But in the short time due to the limitation of the short follow-up time and the inadequate number of patients, the long-term efficacy of these surgeries still remains unclear but do appear to have promising results especially in regard in the healing foot ulcers.

Regardless  the advantages of these surgeries in regard of the treatment of diabetic peripheral arterial disease includes less trauma and a faster recovery speed as compared to other surgeries; higher success rate and a low mortality rate, better chance of saving the leg, and finally has the huge advantage of being done with local anesthesia, which has less side effects and is more suitable for older and frail patients.

These surgeries also effect the r treatment for diabetic peripheral arterial disease could rapidly improve the blood supply and provide time for the foot ulcer and sectional toe wound to heal. With the gradual formation of restenosis, the collateral compensatory circulation was also seen to improve.

There are amazing things being done to help diabetic keep their legs. But the best thing is to not become a diabetic to start with.

About the Author:  Dr. Burton S. Schuler foot doctor, foot care specialist, podiatrist  of Panama City, Panama City  Beach  Fl ,  is a 1975 graduated   of  the New York College of Podiatric Medicine , and has been in private practice for over 38 years. During that time he has been a Professional   member  of the American Diabetsis Association and has treated thousands of diabetics. He is an authority on the human foot and has written two books and hundreds of articles about the foot published in numerous podiatric journals  publications at www.FootCare4U.com. He has written for Collier’s Encyclopedia and  has been interviewed by The New York Times, Cosmopolitan, and First in Women. Dr. Schuler has appeared on dozens of radio and television programs both here and aboard. He is a Diplomate of both the American Academy of Pain Management, and the National Board of Podiatric Examiners. Dr. Schuler is certified as a wound specialist from the American Academy of Wound Management