I wrote this over 2 years ago but brought it  up dated, on the bottom of the page with a very nice video explaining the Morton’s Toe That video has gotten about 45,000 viewing on you tube 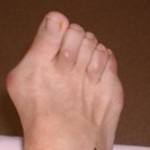 A bunion is an enlargement of “the metatarsophalangeal (MTP) joint”; this is the big toe’s base joint that forms when the bone or tissue moves out of place. This forces the toe to bend toward the others, causing an often painful lump of bone on the foot. The MTP joint, which carries lots of weight, is stiff and sore, making even the wearing of shoes difficult or impossible. It also causes swelling of the feet to occur.  Hammer toes are also associated with the formation of bunions.

Bunions form when the normal balance of forces that is exerted on the joints and foot’s tendons becomes disrupted–leading to foot deformity. They are brought about by years of abnormal motion and pressure over the MTP joint. It is acknowledged that bunions run in families. One theory advanced by Dr. Burton S. Schuler, a practicing podiatrist for over 38 years, Director of the Ambulatory Foot Clinic in Panama City, Florida, and author of Why You Really Hurt: It All Stars in the Foot, is that it is not necessarily bunions that are inherited but toe length, which can lead to the development of bunions

On inheritance and the foot, Schuler indicates that one of the most commonly inherited foot problems is a longer second toe–also known as Morton’s Toe . “That is not to say that you are destined to inherit the same foot pathology your parents have, but in the process of inheriting a poor or weak foot, you open up a Pandora’s box that can eventually lead to any number of foot ailments…The Morton’s Toe is the problem most often inherited that causes foot problems.”

Isn’t a longer second toe merely a cosmetic problem, and how is this related to bunions? Morton’s Toe (short metatarsal bone or hypermobility of this bone) causes the foot to over-pronate, with weight unevenly distrbuted throughout the foot. This causes abnormal stress in that are where the bunion can eventually form as a response . When a bunion bump forms, the foot may develop it’s own “shock absorber” to protect the bunion bump. This is called a “bursa,” which is a sac of fluid that can eventually become inflamed–developing bursitis.

Even if you switch shoes to accommodate bunions or bursitis in your foot, the problem will persist if you do not seek treatment for what could be the root cause of your problem: Morton’s Toe

About the Author: Dr. Burton S. Schuler foot doctor, foot care specialist, podiatrist of Panama City, Panama City Beach Fl , is a 1975 graduated of the New York College of Podiatric Medicine , and has been in private practice for over 38 years. He is an authority on the human foot and has written two books and hundreds of articles about the foot published in numerous podiatric journals publications and at www.FootCare4U.com. He is this country’s leading authority on the Morton’s Toe, ((Long Second Toe) and its associated medical and health problems and on the life of Dr. Dudley J. Morton,
His, first book about the Morton’s Toe, Why You Really Hurt: It All Starts in the Foot published in 2009 is the leading authority on the Morton’s Toe. and presently has over 7,000 copies in print, and sold has thousands of eBook copies ( Kindle) on Amazon. The book is published by the La Luz Press, Inc and is disturbed nationally by the Cardinal Publishing Group. Dr. Schuler’s next book about the Morton’s Toe, called the Morton’s Toe Book will be published in 2014 also by the La Luz Press.

In 1982, he published his first book, The Agony of De-Feet: A Podiatrist Guide to Foot Care. During his thirty eight year career, he has written for Collier’s Encyclopedia and has been interviewed by The New York Times, Cosmopolitan, and First in Women. Dr. Schuler has appeared on dozens of radio and television programs both here and aboard. He is a Diplomate of both the American Academy of Pain Management, and the National Board of Podiatric Examiners. Dr. Schuler is certified as a wound specialist from the American Academy of Wound Management. He has been a professional member of the American Diabetic Association for about 35 years. . His professional and civic accomplishments have earned his inclusion in the 1999-2002 Who’s Who in America (Marquis)